How Seville transformed itself into the cycling capital of southern Europe 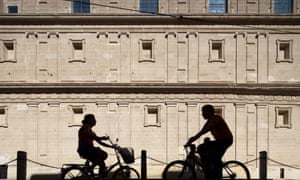 Manuel Calvo bumps his Brompton folding bike along the last few metres of a quiet cobbled street in Seville’s old town, then though a narrow passage and on to a broad ringroad encircling the district. Suddenly, several lanes of cars and buses are zipping past, but Calvo pays no heed – we are on a smooth, green-tarmacked bike lane, separated from motor traffic by both a raised kerb and a waist-high fence.

“Here we are,” says Calvo, pedalling unhurriedly along the network he played a key role in designing. “I’d do a few things differently next time, maybe try and make the lanes a bit wider. But they work. People use them.”

And people do, in large numbers. They do so to such an extent that Seville, the capital of Andalucia in the far south of Spain, has become something of an unlikely poster city for sustainable transport. It is, proponents say, living proof that more or less any urban area can get lots of people on the bikes by the relatively straightforward means of building enough connected, safe lanes on which they can ride.

Such has been Seville’s success – the number of bike trips multiplied 11-fold in a few years – that municipal officials have just started extending the model to other cities in the region.

It’s an unusual tale, marked by the right people being around at the right time, as well as an amount of luck.

Unlike the Netherlands and Denmark, the usual European exemplars of mass cycling, Spain remains far from a paradise for the two-wheeled. According to EU statistics a mere 1.6% of Spaniards nominate the bike as their main mode of transport, even less than in the UK. Almost half say it is a car. 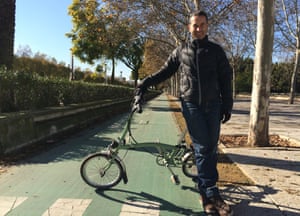 For many years Seville had only about 0.5% of journeys made by bike, with roads choked by four rush hours a day, due to siestas.

A small group of cycle campaigners spent years vainly pushing for change, among them Ricardo Marques Sillero, who recalls first arguing for bike lanes in 1992. “I’ve been doing this so long my hair was a completely different colour when I started,” the silver-thatched university academic says.

His campaign eventually gained support from the United Left (IU), a political alliance led by the Communist party. In 2003 elections the UI won enough council seats to jointly govern with the Socialists, and managed to get the cycling plans in the coalition agreement.

Empowered by the new administration, Seville’s head of urban planning, José Garcia Cebrián, himself a long-time cyclist, set to work. He hired Calvo, who describes himself as sustainable mobility consultant, to design a hugely ambitious network of completely segregated lanes, a full 80km (50 miles) of which would be completed in one go.

Segregation – separating bikes by a physical barrier like a raised kerb or fence – is something of a holy grail for campaigners, who argue it makes cycling accessible to people of all ages, allowing them to trundle along at slow speeds in everyday clothes. This is in contrast to the scene in most UK cities, where mainly young, generally male riders speed alongside motor traffic dressed in helmets and luminous high-vis jackets.

But segregation necessarily involves removing space from another group, usually motorists. In London, even a mayor with the political clout of Boris Johnson is currently struggling to push through plans for a pair of new bike routes against fierce opposition from business and driving lobbies. 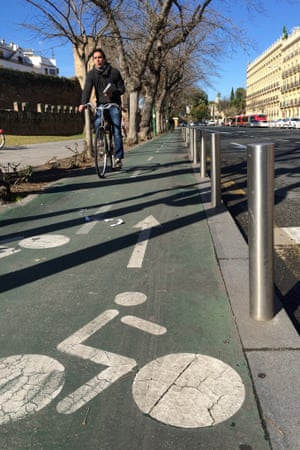 Seville’s cyclists are often protected from cars by a kerb and a fence. Photograph: Peter Walker

In Seville one of the paradoxical reasons for the success of the bike lane project was that so few people believed it would happen at all.

“In Spain there’s been a lot of planning about cycling, but then the plans get put into a drawer,” Cebrián says. “So there was no opposition during the planning process, as everyone thought the same thing would happen. The opposition only started when the infrastructure was being built, and by then there was no way back.”

In fact, so surprised were some of Cebrián’s Seville council colleagues when the work did start that on the first day officials from the transport department, separate from his urban planning section, tried in vain to get the construction crews to halt.

They didn’t, and the demand for the network soon became clear. Even before lanes were finished some cyclists squeezed between fences to use them, an unlucky few crashing into barriers marking the end of completed sections while riding at night.

Cebrián says he was always confident the lanes would be well used: “I’d spent many years riding round the city and looking at it with a cyclist’s eye.

“As soon as the building work was finishing and the fences were removed the cyclists just came. The head of the building team, who’d been very sceptical about the process, called me and said, ‘Where have all those cyclists come from?’ That’s when I knew for sure it was going to work. The came from all over the city.”

The completed lanes are narrower than a Dutch cyclist might expect, and occupy what space they can, with riders very occasionally having to steer around a small tree or other obstacle. They also run along just one side of the road, making the lanes two-way. While this was the product of necessity, Calvo says he now likes this: “I think it makes people ride a bit more slowly and carefully.”

When the paths meet a road junction they curve gently on to a controlled crossing where, officially, cyclists are supposed to wait for a green bike symbol. In practise most pedal across if the way is clear, Calvo among them.

However, unlike London’s much criticised “cycle superhighways” – where riders are protected by little more than blue paint – Seville’s cyclists enjoy a kerb and a fence. Much of the space, Calvo says, was actually taken from bus or parking lanes but the kerb was raised to pavement level to offer more protection. He adds: “This also made it harder to give the space back to cars if a new government changed their minds.”

The net result is not Dutch or Danish levels of cycling, but nonetheless impressive. The average number of bikes used daily in the city rose from just over 6,000 to more than 70,000. The last audit, about a year ago, found 6% of all trips were made by bike, rising to 9% for non-commuter journeys. 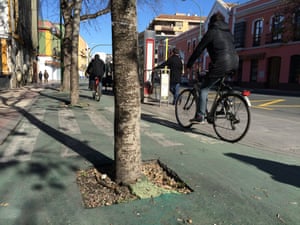 With this has come notably lower pollution levels and a more human-friendly environment. The lanes are also designed for wheelchair users. “We suddenly made a lot of the city easily accessible,” Calvo says with pride.

A tour around the network reveals fewer cyclists than normal, mainly due to what is, for local standards, something of a cold snap (it is sunny and 11C, a temperature at which Sevillans seemingly require down jackets, thick gloves and hats).

But plenty of cyclists are out and what is noticeable to a British eye is both their variety and the ordinariness. The variety comes from the riders themselves – a seemingly equal gender split, with ages going from children to people well into their 70s.

The ordinariness comes in their approach. These are not the UK-style traffic-battling gladiators. Seville’s cyclists mainly ride upright old clunkers and wear everyday clothes. Helmets are almost never seen, even among under-16s, despite a new, if loosely enforced, Spanish law compelling this group to wear them.

The overall sense is of cycling not as a pursuit, or a sport but, in the Dutch style, a deeply everyday activity, little more than a more efficient means of walking.

Seville now has 75 miles of segregated lanes, with other routes radiating out from the loop around the old town. It also has a municipal bike hire scheme, like those in Paris and London, called SEVici, with 2,500 bikes and 250 docking stations.

It is additionally trying to link cycling with public transport. Passengers arriving at the city’s main bus station can use their ticket to borrow one of nearly 200 separate rental bikes, free for the whole day. The city’s university has yet another scheme, in which students are provided with bikes for the academic year. 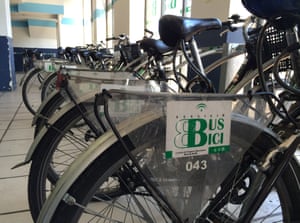 Passengers arriving at the main bus station can borrow a bike all day for free. Photograph: Peter Walker

Seville’s cycling project is now at a new metaphorical crossroads, facing big decisions on how, and if, it can be augmented by policies which don’t just promote cycling but make driving less convenient, a politically difficult decision in a place where the car still dominates.

The current right-wing city administration has reversed previously imposed parking restrictions in the old town, meaning the cobbled streets are often choked with cars. They are also not keen on traffic-calming measures in other residential areas.

Cebrián agrees that Seville’s cycling has reached something of a plateau: “There’s lots more things that could be done, and which were on the cycling masterplan, but just haven’t been done yet.”

And yet at the same time, Seville’s vision is being exported. Cebrián, who trundles around the bike lanes he helped devise on a sturdy, Swedish-made Pilen bike, has moved from the city hall to the offices of the regional government, where he is overseeing the grandly titled Plan Andaluz de Bicicleta.

Under this, ever city in Andalucia with more than 100,000 people has signed up to build segregated lanes (“Apart from Jaén,” notes Cebrián of the municipality north of Granada. “Because they’re really old-fashioned.”) Early building work has started in three places, Jerez, Algeciras and Almería.

Back in Seville the effects are arguably greater than the 6% cycling share would indicate. For instance, there has been a small but appreciable mini-boom in a bike-related economy, a particular benefit in a city with an unemployment rate of about 30%.

Before the lanes were built Seville had about 10 bikes shops. Now it has around 50

Before the lanes were built, Calvo says, Seville had about 10 bikes shops. Now it has around 50. One shop in the old town, Santa Cleta, which lends me the bike on which I follow Calvo, runs courses for unemployed locals to become trained cycle mechanics.

Other fledgling industries have begun, including electrically assisted cargo bikes which trundle through the old town, delivering goods which used to be carried in vans.

The effect is also being felt in Seville’s vital tourism industry. On Tripadvisor, thetraveller-recommended rankings of attractions and activities in the city are littered with bike tours.

One of the curiosities of Seville’s success is how few other Spanish cities have sought to copy it. Other places have built bike lanes, notably Barcelona, but these are not fully segregated and the cycling share remains lower. “We’ve had more visitors from the rest of Europe looking at what we’ve done than we have had from Spain,” says Calvo.

But the main lesson seems clear. In a continent where policymakers are struggling to tackle a public health disaster caused by inactivity, which a study this month said kills almost 700,000 Europeans every year, active travel is seen as a key part of this.

Cyclists are active, and Seville shows they can be tempted out, even in a city which, while flat, has almost no cycling culture and a far from ideal summer climate, with temperatures hitting 40C. If you build the right bike lanes, it appears, people will want to use them.